A driver stops to relieve himself by the side of the road late one night along a stretch of road, in an undeveloped area consisting mostly of swamps and cattle fields.

“Someone’s coming,” his sister calls out to him from the passenger seat, and all at once he hears the sounds of branches breaking in the woods.

He looks up, and sees a darkly colored animal, approximately seven to eight feet tall, running toward him from within the treeline.  Jumping back into the car, he looks again, and sees it is advancing on them rapidly.

Frightened, he takes off; but as they car moves away, down the road, he pumps the brakes a few times to illuminate the road behind them.  The creature is standing in the middle of the road, looking at them as they depart.

This account describes a reported experience from almost a quarter century ago, from September 1989, on a back road off the highway west of Cocoa.

If taken at face value, it could be considered one of nearly a dozen reported encounters from Brevard County with  Florida’s own variation on Sasquatch, the “Skunk Ape.” 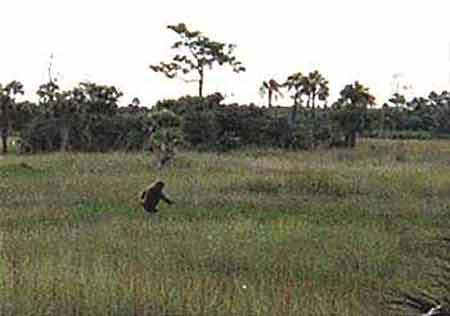 “Some accounts indicate that the Skunk Ape has been a part of Florida lore for decades, but it has been reported widely only since the 1970s, when developers began encroachment into the Everglades,” according to the encyclopedia Cryptozoology A-Z, by Loren Coleman and Jerome Clark.

This cryptid derives its name from the strong stench described in reports of run-ins with the creature, of which there were dozens during its heyday in the 1970s.

A 1997 article in the Daytona Beach News-Journal makes reference to there being several sightings in Brevard County as part of this early wave of attention, but does not specify them, and I have been unable to uncover any such reports in perusal of local news or cryptozoological sources.

More recent decades, however, exhibit at least ten such reports from diverse points across the Space Coast, including the 1989 account described above.

Two years earlier,  in July 1987, another motorist indicates seeing a similar tall, dark anthropoid crossing I-95 in the distance ahead of him as he drove by en route to Melbourne.  The figure, who he estimated at 6 to 7 feet tall, looked down the road before crossing from the median to the west side of the highway.  The animal appeared to be walking upright, but, “very hunched not completely upright like we walk.”

At least half of the known reports for Brevard County involve sightings of apparent ape-men near or crossing roads seen by drivers, though a couple come from boat pilots.  One witness says he was frogging on his boat on St. John’s River, just south of Lake Winder when he heard loud dull noises.  Suddenly mud began hitting his boat, and when he turned his light to see where it was coming from, he found himself staring into a “Neanderthal” face approximately 30 feet away. He described what he’d seen as being about eight feet tall, with dark colored hair, and slightly lighter brown hair around its face.

“I lost all feeling in my body, I just about passed out,” the witness reported to the Bigfoot Field Research Organization, ” I was lost, I didnt know what to do. I was in total shock.”

Another such account came from a fishing guide, who said that he along with two client passengers, a doctor and an airline pilot, spotted the hair-covered man-beast walking up a sand bank at the Merritt Island Wildlife Refuge.  At first he believed it to be a bear, until they got closer, and it turned and looked in their direction.

“It was approximately 6/7 ft tall, long reddish brown hair, and was built like a side by side fridge, very square. It’s face looked more cave man then ape.”

“He was found to be entirely credible and believable,” concluded naturalist David Wright after a follow-up interview. “The witness’ responses to variable questioning concerning this incident produced no indication that this was a fabrication, but a description of an actual encounter.” 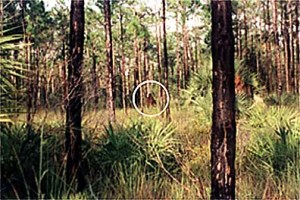 1997 photo of an alleged Skunk Ape by Vincent Doerr

Allegations of two more sightings in Titusville emerged in 1993, according to author E. Lynn Wright, both by seemingly reliable observers- one a NASA engineer, the other a Lockheed systems manager at Kennedy Space Center.

Another sighting originated on US-1 near Rockledge one rainy night in 1998.  This time the witness description is of something with long, dirty yellow hair, covered in some kind of tarp or piece of plastic.

“I have never seen anything like that in my life,” she said. “It was not a man, it was entirely too tall.”

The following year another sighting came from Palm Bay, of a nearly seven foot hair covered creature running across a rural road.

Another road-crossing incident came from a witness in 2011 on Highway 407, outside of Port St. John, of a tall, extremely muscular two legged animal running very fast across the road, and leaping to the embankment beyond.

“The feet where huge. as it took steps I noticed how large they were,” he said. “The over all body seemed very THICK. The animal was very muscular. From the side view I had , you could see just how thick of a body it was.”

Another partial encounter report came from some hunters west of Melbourne in 2013, who had been sitting in a hunting blind when they heard loud crashing sounds.

“I thought it was pigs and was curious to see if he could pinpoint where they were but the crashing got louder and he said the foot steps sounded like a man’s gait, 2 legs,” he said. “…then all the sudden a big boom and then the loudest and creepiest howl I ever heard, nothing like a man or animal I’ve ever heard.”

Interestingly, none of these accounts make any reference to a particular smell, the very attribute often said to be the hallmark of the specific sub-category of “Skunk Ape.”

Then again, the visual characteristics of this speculative Florida denizen have undergone some changes over time, as well.  In early accounts, from the 40s to 70s, this alleged undiscovered creature is described as much smaller than the Bigfoot of more northern regions, and less upright, walking on all fours or with a “waddling gait” more resembling an orang-utan or chimpanzee.  While some more recent accounts, along with some photos said to depict this creature, still adhere to this, it is more common to find accounts more closely resembling the Sasquatch ideal popularized in television and movies, a taller, more man-like entity.

Is it possible there could be more than one still-undiscovered primate evading human attention in the swamps and back woods of the Sunshine State, or are the apparent differences in accounts sign of its folkloric nature, a legend growing and evolving in the mix of external cultural influences?

Clark, J.; Coleman, L. Cryptozoology A To Z: The Encyclopedia Of Loch Monsters Sasquatch Chupacabras And Other Authentic Mysteries of Nature. Simon and Schuster, 2013

“Florida may be home to Skunk Ape, other mythical creatures.” Florida Today, October 28, 2007

Since the late 1950s, Brevard has been a place from which humans have reached out from the Earth to outer space.  Aptly known as the Space Coast, even its area code, 321, was given as an homage to the countdown sequence that has seen so many craft launch out toward the stars.

Some believe that, at least on occasion, it may have been reciprocated; that outer space has seen fit to reach back.

Take for instance an account of a mysterious object that appeared during the test launch of a Polaris rocket in January 1961.

The rocket launch began normally enough, at 12:14AM.  Suddenly, alarms at mission control indicated that another object was approaching the rocket at high speed.

The object took up a position directly beside the rocket, appearing to pace its flight, something approximately as wide in diameter as the rocket was in length.  A much stronger radar target, the tracking devices diverted from the Polaris and locked onto the unidentified object, which was later described by an observer as being disc shaped, 20 to 25 feet across, and 6-8 feet tall.

Radar continued to track the unknown object for about 14 minutes, before it reduced speed and was no longer pacing the rocket.  Finally, it veered away and disappeared from sight.

Later examination of the radar equipment showed there had been no technical failure, the object appeared to have been solid, and under controlled operation.

Only some months later was the incident disclosed by the Air Force to the National Investigations Committee on Aerial Phenomena, with no official conclusion as to what it might have been.

This one appeared at 9:57AM, and was tracked on radar for over 30 minutes, according to reports collected among the files of Project Blue Book.  The object first showed up 60 seconds before the scheduled launching of Polaris missile test #1352, making repeated orbits of several miles around the launch site. 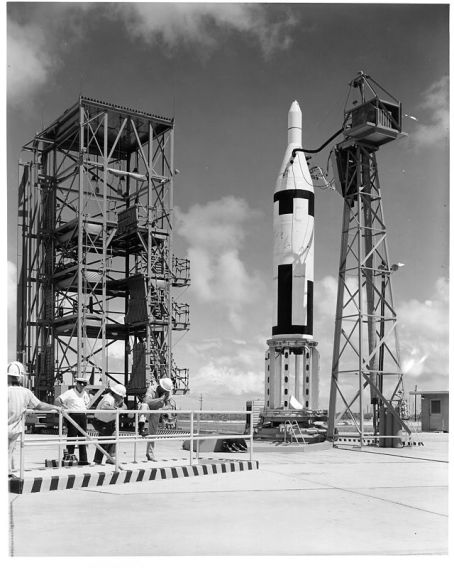 Described as “approximately the same size as a C54 aircraft” by a radar operator, it moved at speeds ranging from 150 to 600 knots.  A flight was scrambled to intercept the object, and was able to lock on for two minutes, before “the unknown took evasive action and disappeared, preventing full accomplishment of the intercept.”

One observer stated that “the action of the UFO indicated a current knowledge of the missile launch countdown,” in that it would move beyond the range of radar during periods of hold, and zoom back in when the count was resumed.

Command at Patrick Air Control & Warning believed the unidentified object to have been a foreign aircraft, based on its evasive behavior, but no visual confirmation  was made of exactly what kind of craft it was, if  indeed it was a craft.

Six months later, another potentially anomalous object was reported seen during the test launch of a Titan missile, on September 7.

This object was seen only briefly, ascending vertically across the scope of a tracking camera following the launch of the Titan.  Observed at 8:37PM, the object was only visible to ground operators for a few seconds, but nonetheless considered unusual enough to warrant a report and subsequent attempt at analysis.

Reconstructing its trajectory later, it was determined that the “bogie,” referred to had never been in dangerously close proximity to the Titan, alleviating concerns by personnel who were by that time perhaps growing alarmed by the number of unidentified aerial objects surrounding launches that year.

The official analysis supplied by superiors after the fact was that the object observed was “very probably a star,” specifically Gamma Piscium.

“Gamma Piscium is a relatively faint star, and quite stationary. It is absurd to think that a person professionally qualified to track missile launches would be puzzled by one particular star out of a great many,” wrote Hynek.

What was the cause of these repeated reports of unusual and unidentified objects around the launches in Cape Canaveral that year, if in fact they shared a common cause, as opposed to being unrelated incidents with varying explanations?

It has often been observed that sightings of unidentified flying objects seems, over the past century or more, seem frequently to coincide with the site of military activity or the emergence of new technology.  If it were indeed to be consciously operated craft in these instances (as would seem to be the case in at least one if not more of the 1961 incidents at Cape Canaveral) there remain multiple possible interpretations that could be applied:

Whatever the cause, or whatever your beliefs with regard to the broader subject of Ufology, these incidents remain an interesting sidenote to the early history of Cold-War era missile testing in Florida’s Space Coast.